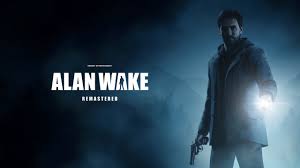 Alan Wake remastered is the exact same game Microsoft released on the Xbox 360 in 2010. It is quite remarkable that the horror-lite title has remained one of the most compelling story-driven video games for eleven years.

Veteran fans instantly recognize the contrast between dark fog and bright lights. They are now treated to 4K textures, 60FPS gameplay, and a new graphical interface. This remaster is the best way to begin Alan’s journey in Bright Falls.

S for your regional pricing.

The story of Alan Wake unfolds like a long Twilight Zone episode with the nuanced and characterization of a Stephen King novel. It’s also weird. While this is a fun game, it is mostly played with humour. However, the story is treated with respect and an understanding about what makes a good story. Remedy creates a dreamlike atmosphere that wraps the entire experience. This was actually Alan’s dream. It is a great way to set up the messy story.

The opening takes us to Bright Falls in Washington, where Alan and Alice have been on vacation. Alice believes that the small town of Bright Falls can help Alan overcome his writer’s block. Soon after they settle in their cabin, Alice disappears and Alan begins to lose his memory. The central objective of the game is to find Alice. She is therefore not given much other than ‘is Alan’s wife’. This is disappointing for a game that does an excellent job with its supporting roles.

Barry Wheeler, Alan’s friend and agent, is the standout. He is the main source of comic relief. He can be annoying for some but I find his charm endearing. Barry’s success is due to Fred Burman’s spot-on delivery.

Barry may be a great writer, but the story’s main strength is the way it approaches Alan’s profession as a writer and its commentary about artistic creativity. This is made even better by the way it is done. Alan might have monologues on the feeling of a story being out of his control and some metaphors about editing, but it all comes with a sustained creepy ambience and borderline B movie dialogue.

The game was inspired by Twin Peaks but is much more accessible for casual horror fans and gamers. Although certain plot points can be interpreted however, you don’t need to know much about dream interpretation to understand their meaning. An episode of Night Springs, a blatant Twilight Zone tribute, is featured in the game. It states that “it’s an extremely fine line between the stupid & the sublime”. Alan Wake walks the fine line between the stupid and the sublime with finesse.

My only gripe with the story is the length of time it takes for anything to happen. Episodes 2 & 3 have the same goal for Alan. With little consequence, the second episode could have been trimmed completely. The first half of the episode would have been boring if it weren’t for its dark atmosphere and survival horror gameplay.

Alan must fight the Taken in his quest for Alice. Bright Falls residents have been ‘taken over’ by dark entities. Third-person shooter players must lower their shields using a light source such as a flare or flashlight before they can finish them off with a firearm. It is not a shooter. However, there will be no cover or ammo drops from your dead enemies. It is a survival horror and shooter title first. Resource management is crucial. This can lead to some very stressful situations. I found myself reaching for my life-saving flare gun several times.