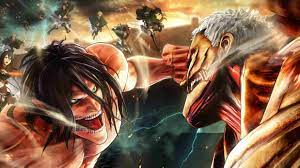 An Attack of Titan trailer for season 4 has been released. Fans were left with a very disappointing cliffhanger after the first half of the final series aired from December 2020 to March 2021.

The latest episode ended with two titans in an epic battle. Reiner Braun, who has Armored Titan, was set to face Eren Yeager, who has the Attack, Founding, War Hammer Titan. Although they have fought in Titan form before Eren has the War Hammer Titan at his fingertips. He’ll hopefully use it in the upcoming fight.

The Attack Titan is seen being stabbed by the Armored Titan using what appears to be some of the Titan Hardening power’s substance. The ability to stab the Attack Titan with a piece of Titan Hardening power is what Eren’s Titan has. It could be enhanced by his acquisition of War Hammer Titan. It will be interesting to see how the Attack and Founding Titans stack up against War Hammer Titans. One thing I noticed about Eren’s Titan is that their eyes are not as brightly colored. They are still green but they look very faded in this trailer.

This trailer confirms that season 4 of Attack on Titan will be aired on January 9, 2022. Fans will receive a wonderful present right after the holidays.