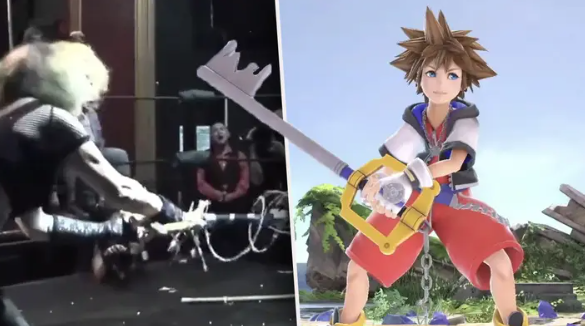 Every wrestler has a signature move or weapon. Edge can be seen with a steel chair, but it is rare to see him without one. Sting preferred a baseball bat, while the Big Boss Man used a nightstick. Triple H was the first to get out his sledgehammer. And don’t forget Boogeyman with his creepy worms. It still makes me shudder.

Do you get the point? Wrestling is a showmanship sport, and weapons are an integral part. An item can likely be used in a match if it is usable. But, I must say, this latest example surprised me. One wrestler now uses a Kingdom Hearts Keyblade wrapped with barbed wire. Do you think that’s original?

Kidd Bandit started the match by writing Drexl’s name in their “Bandit Note,” inspired by manga and anime. If you aren’t familiar, the Death Note is a way to write someone’s name. Bleak. Drexel was able to tear the page out of the book and tape it to Kidd Bandit’s forehead before the book could execute his demise.

Kidd Bandit dropped Drexl onto a few thumb tacks. The Keyblades in the game were not wrapped in barbed wire. Kidd Bandit used the weapon to see Drexl go. Overall, the match was chaotic, but I appreciated the nerdy references.