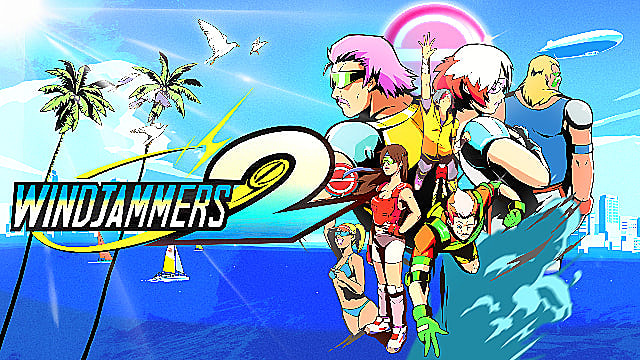 1994’s Windjammers was a unique game. It was released on the Neo Geo arcade machine, which allowed users to bring home arcade-quality games. It was a Neo Geo game, through and through. It was stunningly beautiful, with its cartoony animations and slick animations. But what made it so special was its gameplay.

Windjammers, a 1v1 frisbee sports game, is unique. It plays like tennis, volleyball, and the classic video game Pong. Windjammers was mostly forgotten until the bankruptcy in developer Data East. The IP changed hands to DotEmu, who released the arcade classic on the Switch and PS4. The game was well-received by critics and spawned a unique competitive esports scene. A sequel was released 18 years later.

Dotemu has kept the cartoon-style characters of the Neo Geo for Windjammers 2. However, they have had a modern redesign that looks more cartoonish and cartoon-like. The music of Windjammers was always upbeat and synthwave-esque. This sequel has the same vibe with bright, cheerful tracks.

Windjammers 2’s main selling point is its ease of use. Inexperienced players can pick up a controller and quickly get the basics of the game. The rules can be adjusted, from the number of points required to win around to the number of rounds needed to win a match. It would be best if you read the tutorial before you jump in. However, anyone can have a quick play with Windjammers 2 without learning the controls.

Windjammers 2 has a fun progression and gameplay. You must score at least 15 points to win around. Different amounts are awarded depending on the location of your frisbee in the arena. Standard matches consist of three rounds. Even inexperienced players can score 15 quickly, so matches can be quick. It doesn’t take long to find the next arena and start over. Windjammer 2 is quick and simple to use to avoid being bored.

Windjammers 2 is a great multiplayer game. It doesn’t matter if you are an expert or an amateur jammer; the matches are intense and fast. But it’s great fun when those discs fly. The matches are intense and can quickly change the flow of the match. It only takes a few missing discs to distinguish between winning or losing. It’s a competitive frisbee. It’s silly but great fun.

Windjammers 2 can be played quickly, but it’s not difficult to master. I was often confused by the game’s mechanics when I first encountered it. However, there is a very basic tutorial. The game does not do a good job explaining the intricacies.

Windjammers 2 can be very easy to learn and can be quite frustrating. Windjammers 2 has a how-to section that teaches you to play the basics. However, there are many intricacies to learn. Some moves aren’t obvious, but they can be. It can be unclear and requires a lot of practice to get used to. This “tutorial”, while it is a collection of images, doesn’t make sense.

Windjammers 2 can be very simple to learn, but it is not difficult to master special moves or when to hit yours. Windjammers 2 is a game that requires you to practice and experiment. Although it can be frustrating at times, Windjammers 2 becomes a more rewarding experience when you learn how to make the most of it.

That’s what Windjammers 2 should be aiming at. This is not a game where you can battle CPU-controlled opponents. Instead, it’s meant to be played online against real people. That’s where Windjammers 2 excels. Windjammers is a unique multiplayer game, and DotEmu would love to see it continue its success with Windjammers 2. Maybe even as an esport.

Windjammers 2 lacks game modes, which some might find disappointing. You can alter the rules to make matches shorter or longer, and different characters have unique skills. Different areas also have different points scoring rules. There are very few game modes.

Online, couch-versus, and offline play are all possible, but there is no choice in terms of game modes. Single-player is much like a 90s 1-on-1 fighting game. You need to play a series until you win the game. DotEmu knows that Windjammers 2’s appeal is its fast, competitive online play. It’s easy to see why they have chosen to give up more complex game modes in favour of a more esport-style game.

Windjammers 2 has a fast-paced, beautiful game that requires a lot of learning. Windjammers 2 can be frustrating at times, but it’s worth the effort and learning how to master its more complex systems. It’s easy to learn but can be difficult to master. Other people best enjoy this game.