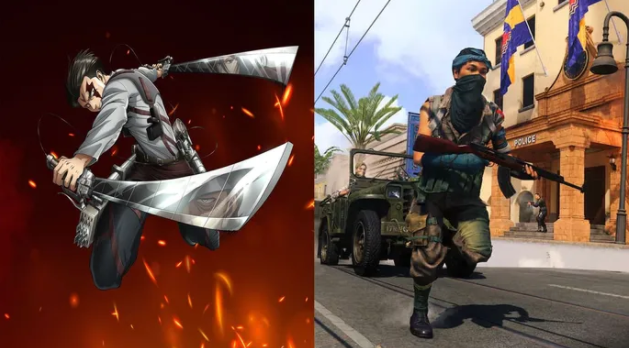 With plenty of criticism surrounding the look of the Operator Skin within the AoT bundle, the developers have claimed that it was never intended to be a replica of Levi despite the scarf and hairstyle being identical to what he wears throughout the show. “They are probably backtracking because everyone hates how he looks,” one Reddit user claimed. “The hair and scarf are dead giveaways,” another added.

Crossovers in Call of Duty are nothing new. During the Black Ops Cold War cycle, the franchise joined forces with the Scream movie franchise to bring Ghostface to the action and partner with the Die Hard and Rambo franchises to bring their characters to life. The Attack on Titan crossover marks the first anime collaboration for the franchise. Still, many have already drawn comparisons to Naruto’s crossover with Fortnite, stating that Epic Games knows how to do it “properly.”

The Tracer Pack: Attack on Titan bundle is set to release on January 20th for those still interested in purchasing the cosmetic pack. Alongside the Operator Skin, players can get their hands on blueprints for the Sten, the Volk, and three themed Finishing Moves.

After weeks of leaks and speculation, Call of Duty has officially confirmed a crossover with Attack on Titan is taking place across Vanguard and Warzone, much to the excitement of both communities. As part of Season, 1 Reloaded players will get their hands on a themed cosmetics bundle, but after seeing what’s on offer, fans have been quick to express their frustrations on the bundle that was leaked several months ago.

Those looking to purchase the bundle have claimed that it’s simply not worth the money Activision is charging after stating that the Operator Skin looks nothing like Levi Ackerman, one of the anime’s main characters.