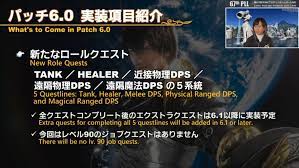 The Final Fantasy XIV Producer stream featured details about Role Quests’ return and how they will be implemented in the upcoming Endwalker expansion. These will function in the same way as they did in Schattenbringers but with some significant changes.

Five questlines will be available based on different roles: Tank, Healer and Melee DPS. Physical Ranged DPS and Magic DPS are also included. These questlines will provide some narrative insight but they won’t be necessary to progress the main scenario questline. Also, there won’t be any level 90 Role Quests. The Shadowbringers level 80 quests were intended to provide a narrative ending.

Patch 6.1 will add additional Role Quests. The date of when this update will go live is yet to be determined. These Role Quests are available to those who have completed all five questlines in Endwalker. They will look similar to the additional ones found in Shadowbringers.

The most important news from the Live letter was that Endwalker launch has been delayed to December 3, for early access, and December 7, for everyone else. This is a two week delay from initial release dates. The post-launch content plan for Endwalker was also presented by the team. This included information on 6.01, 6.05 and the Pandaemonium raids series. Our FFXIV Endwalker preview video. Foreal.