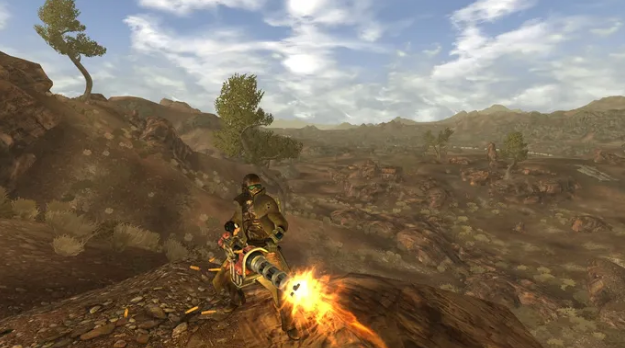 Are you tired of Fallout’s VATS system? It allows you to pause time and take a lot of quick headshots. Do you want to spice up your vanilla gunplay?

If you are a fan of Max Payne then the Fallout modding community might be able to help you out of your predicament.

Hopper31 has created a new mod called ” better GRX”. It takes one of Fallout New Vegas perks and turns it into something similar to the bullet time mechanic found in Rockstar and Remedy.

The implant GRX perk in vanilla games has the same effects as the drug turbo. It temporarily slows down the player’s time, but it does not make you addicted.

After you have installed the Old World Blues add-on to be able to use the mod, you will gain access to a new ability that you can assign to hotkeys while using the mod.

This ability uses your action points to provide energy in the same manner as VATS. It will slow down time but keep things moving so enemies can fight back.

These VATS-based perks, such as Plasma Spaz and Grim Reaper’s Sprint, are still worth considering. Even if you use GRX instead VATS, they will still have the same effect on your action points count.

This ability is not a problem if you get it too early or become overpowered. You must be at least level 30 and have eight endurance points before obtaining it.

This video shows the modded GRX at work.

You can also configure the mod with The MOD Configuration Menu add-on. This allows you to modify how fast your action points drain or how many you need for activating GRX.

Grab your cowboy repeater and get ready to kill some raiders slow-mo. Follow us on Twitter for more information about mods for games such as Skyrim or Fallout.