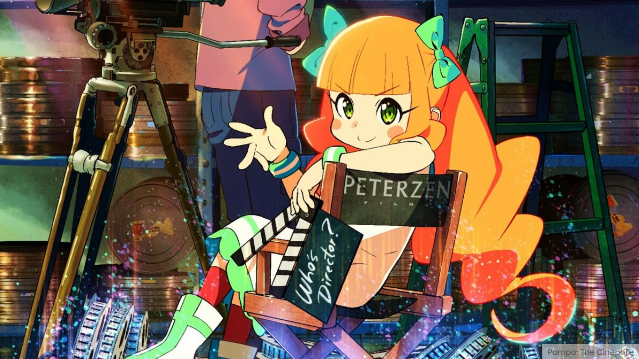 Pompo: The Cinephile is a truly unique movie. Takayuki Hirao’s animated movie is based on the manga series of Shogo Sugitani. It explores the journey of a young filmmaker throughout the creative process. Although the subject matter may seem mundane, Hirao’s animated film captures the true magic of filmmaking.

Pompo: The Cinephile is the story of Gene Fini, a timid and young film assistant who responds to Joelle Davidovich Pompo Pomponette’s wishes. Pompeo, a young B-Movies filmmaker, considered a visionary in Nyallywood, is eccentric. Despite her ego, Pompo treats Gene with respect and helps him navigate the maze of filmmaking. After earning her trust, Pompo gives Gene the ultimate responsibility: to direct, edit and produce his first movie. Gene now has the responsibility of directing his first film. He must apply all the lessons he learned from Pompeo to make his dreams and those of others come true.

Pompo: The Cinephile looks like a classic anime movie. The story takes place in Hollywood and features a variety of characters with unusual names, including Natalee Woodward, a struggling actress, and Martin Braddock, who is a cinematic legend. Marion Carey makes an appearance. Characters with large eyes and long hair are often portrayed in the film. This is often indicative of a character’s personality. Gene’s hair looks extravagant and large, while Pompeo’s is neat. He also has permanent shadows under his eyes that hint at his exhaustion.

There is also a satirical aspect to the approach. Takayuki Hirao’s depiction of Nyallywood is colorful but also very serious. Beautiful shots of Nyallywood’s cityscape and hills are shown with soft colors and glitter. The city is also home to many superficial and egotistical people looking to make it big. In this instance, the timid Gene is at risk of being sucked up by Nyallywood, an unforgiving business.

We meet many believable and entertaining characters at every level. Gene Fini is the main character in this story. He’s a struggling filmmaker trying to make it big at Nyallywood. At first, he is timid and awkward. However, he becomes more confident and daring as he is given more responsibility. Pompeo, his master, is wild with wild hair, reflecting her fiery personality. She also has moments of sadness and unease. This shows that success can come with setbacks. Takayuki Hirao isn’t too colorful with her personality, and these profound moments help create a compelling character that we can enjoy and even respect.

This film doesn’t feature any real bad guys. While we meet some sleazy investors and executives, there is no malicious intent or nefarious motive. They cannot cope with Nyallywood, a monster that is larger than them. Gene is up against a lot of opposition. But his opponents aren’t cardboard cutouts of bad people. They’re old, grizzled veterans who have a lot to offer Gene.

The film’s subject matter is perhaps a fascinating aspect. Many documentaries and flicks are made about filmmaking, such as Hearts Of Darkness and The Disaster Artist. Rarely is this process rendered in animated form. This approach helps us bond with characters and their struggles better than films with real people.

Although Hirao’s world may be animated and even comical at times, Gene’s struggles – deadlines or personal failures – are very real for everyone who watches. While other characters may appear dazzling or extravagant, Hirao helps them develop more serious personalities when they face obstacles.

Pompo: Cinephile isn’t overloaded with information or exposition. Takayuki Hirao guides us from the beginning of a film’s conception to its final screen. Each stage is not without challenges, but every obstacle can be overcome with creativity and luck. This is something that everyone can relate to.

Pompo: The Cinephile is a popular choice among all audiences. The characters will be loved by anime lovers, and newcomers will appreciate all the effort into making this film. Takayuki Hirao tells a completely character-driven story and has a great message: dreams can be realized through hard work, faith, and faith in oneself.