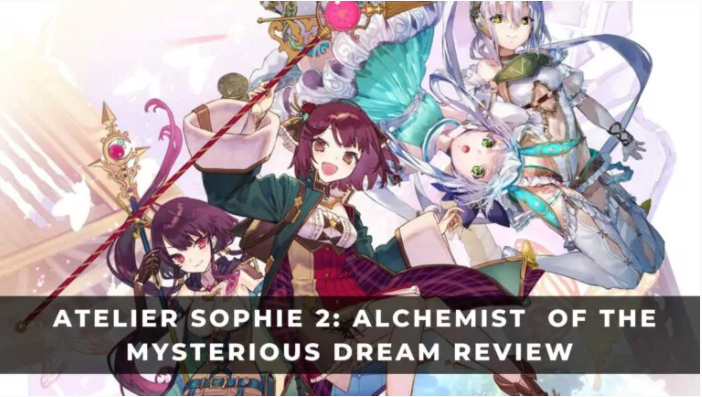 Since 1997, the Atelier series has been in existence. The main series has over 20 iterations alone, not counting spinoffs or remakes. Few other game franchises can boast this level of success.

This title is a sequel to 2015’s Atelier Sophie: The Alchemist of the Mysterious Book. It was released on PS4/PC to positive reception from both critics and fans. People who have fond memories of the original will be curious to see how this sequel compares.

Gust Corporation developed this series, and it was published by Koei Tecmo. Atelier Sophie 2: The Alchemist of the Mysterious Dream is the latest.

Atelier Sophie 2 is now available on Steam, PS4 and Switch.

Atelier Sophie 2 – The Alchemist of the Mysterious Night – Trailer Announcement

Our protagonist Sophie and Plachta, her mentor, begin the game by wandering through a forest. After the previous game’s events, they set out on an adventure to find Plachta’s body. It has been replaced with a doll. They are not alone in their search for Plachta’s body. Plachta had been dreaming of a mysterious tree and had taken them deep into the forest.

They discover this massive tree with its bizarre, logic-defying spiral trunks and a large crystal nestled within it. It is almost sure to be a magical tree. Things quickly get out of control, and the two are separated and spirited away into a magical world ruled by the Goddess Of Dreams. The first hour of the game is pretty much what you’d expect, even though it relies heavily on some old tropes that may be too familiar.

These events don’t set the scene for a compelling story, but they do a great job setting the tone and introducing you to a new world. It doesn’t matter – The opening scenes leading to the events make it clear that this game is character-driven. This also sets the expectation that players will experience strong character development.

The story progressed, and I was able to see that the characters’ strength made for enjoyable interactions, even though they were sometimes bound by familiar tropes. Although the magical dreamworld our protagonist finds herself in is full of mysteries and exciting things to uncover, it feels very low stakes due to its nature as a pocket dimension.

This isn’t a bad thing. The game seems to be more casual and maybe a refreshing change if you’ve recently played a hardcore RPG like Shin Megami Tensei. However, there are some problematic enemies that you will encounter early on in the game.

Sophie 2 is, like its predecessors before it, a traditional-styled JRPG that has a solid and well-developed animation aesthetic. There are many gameplay elements that I want to discuss here. I will do so in the order they appear.

To give you a better picture, Atelier Sophie2is a solid game. Some might be struck by the large cast of mostly female actors and the anime visuals. This and all other Ateliergames might be tempting to take one look and say, “Oh, that’s one of those games”, but after looking at so many, you can quickly counter with, “Surely not!”

It’s OK not to like the anime styling or overtly feminine cast. But Sophie is more than what meets the eye. A solid, enjoyable game lies behind the adorable anime girls and idyllic settings.

You get a tutorial phase the first time you take control of a character in the game’s opening scenes. Sophie2is, not a punishing game. It slowly shows you how to navigate the world and introduces you to other characters.

Erde Wiege, a sizeable semi-open world that you can explore through various interconnected maps, is quite large. You can harvest hundreds of ingredients as you travel, and these will be automatically deposited into your storage area when you return to the Atelier.

You might find yourself in exciting places by completing quests

This is possible with just a tap, even if your pockets are getting full. You will find a quick travel feature in the game that allows you to travel between teleport stones scattered around the globe. This feature is not available directly, but it can be used to return you to the Atelier.

Play as Sophie, our aspiring alchemist. You can either jog at a faster pace than walking, which is her default speed. Or you can sprint by pressing the RB button. The options menu allows you to change the function from “hold to toggle”, so running is not required.

Sophie can jump, but it is more for significant steps than any form of platforming. Sophie will automatically cross certain obstacles as you approach her, such as hopping across barrels to cross the water. The Y button allows Sophie to strike an enemy or harvest ingredients within her reach. Anyone who has ever played an RPG will know the X button, which opens the menu. It is simple enough to use with only a few game-specific quirks.