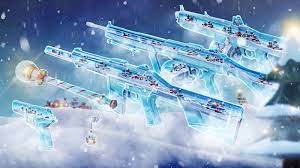 The Valiant Snowfall Bundle has a block-of-blue ice theme skin aesthetic. Each weapon’s halls are decorated with Holly, Christmas Trees and Villages. The weapon isn’t as expensive as the skins and has fundamental effects.

You can purchase one of these Valorant Skins if you are interested. It will increase your valiant balance by the following:

It will cost 5100VP if you want to purchase the whole Bundle.

This Bundle is, as you can see, much better.

The new Snowfall Wand is undoubtedly one of the most impressive parts of this Bundle. It is very detailed and unique for a melee weapon cosmetic. It has the same design as the other ice skins but with a snowglobe instead. The rod is decorated with Holly at the top and wrapped in red ribbons. Above is an image of the skin.

The Valornat Snowball fighting mode limited-time is back. The Snowball mode returned this year, and players had the opportunity to vote for Escalation, Replication, or Snowball fight modes. Anyone can jump into the game now and load the Snowball Fight, which will last until January 4.

This mode is a TDM mode. The team that gets 50 kills first wins. Each character has a snowball launcher that deals 150 damage per contact.