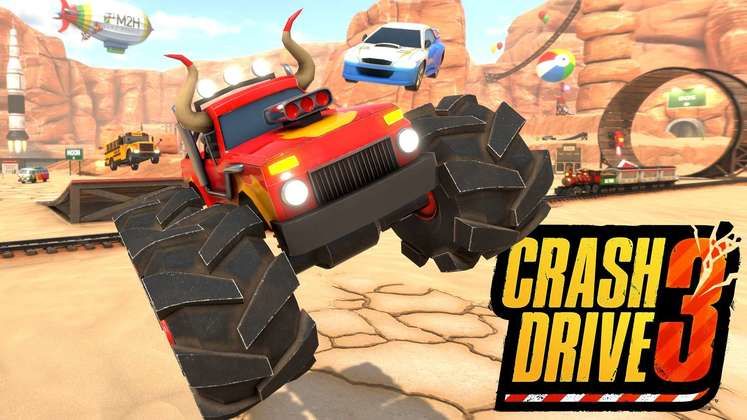 As you age, your games lose some of their sparks. They don’t get any worse, but it can cause them to lose some of their magic. You play a game differently as a child than as an adult. It’s all about the adventure, not the accomplishment. However, adult gamers are often trying to find the best games. It’s challenging to find games that bring back childlike joy.

Crash Drive 3 is this year’s closest example. M2H, the developer behind WW1 shooters Verdun & Tannenberg, has created a little bit childish game. The game features toys-like cars and stunts and an intriguing approach to an open world. Is that enough to make you feel good? Let’s find out.

This is about as boring as it gets. You’re here to have fun and drive cars. Sometimes it’s in the desert and sometimes on the moon. It’s a silly game, but it works well enough. This means that the story you get from the game is not from you but the system. Multiplayer games are unique because of this. Everybody has a story about a Fortnite victory or a group of roleplayers you met in an MMO. Is Crash Drive 3 the kind of game you can tell a great story about? This type of game you can share with your friends on discord. It’s kind of. We should first explain the mechanics of the game.

Add some Rocket League-Esque driving. Add some Tony Hawk scoring and tricks and an open world, and you have Crash Drive 3. It’s a fascinating way to create a game. This is evident from the beginning. It instantly brings back memories of Tony Hawk’s Pro Skater 5 with its attempts at online multiplayer. THPS 5 used a lobbying approach to allow you to play with your friends and also skate with other players. It was terrible. Crash Drive 3 uses similar ideas, but it’s a lot more entertaining.

Crash Drive 3 is a driving game that uses simple mechanics to significant effect. You are immediately given a brief tutorial about the driving mechanics, and then you can get on with the game. Imagine Rocket League’s driving feeling heavier. You can also boost. This is combined with the ramps and ring littered about, and you can see what you have to do. Here’s where Tony Hawk comes in.

Points can be earned by flipping, spinning and drifting, and landing gracefully. You can increase your combo multiplier to get more points for tricks and recharge your boost. Although your options are limited, you can still do a lot of cool tricks. You can even dive through rings across the levels, akin to Tony Hawk’s gaps. Driving is an excellent sport because your car gets better every time you drive it. You can boost, drift, and be as fast as possible to increase your stats until you reach their maximum. If you wish, you can pay to max them out. Maxing out cars allows you to buy more. This is a vicious circle that can lead to a lot of frustration.

You will see events as you travel around the globe. This is the heart of the game. There are the basics, like races and getting to a higher level than other players. Some are more difficult, like Cops and Robbers and King of the Hill. Many games will help you get the best score or tag the props. You can even play a game mode where a beach ball appears, and you have to hit it harder than anyone else. There are many game modes to choose from, so there’s always another if you don’t like one.

Tank Battles is the most bizarre game mode, and it can only be played in the tropics. You have a tank, shooting other players out of the level. It’s not like a tank, which makes it even more fun. It’s as absurd as it sounds to do a quick drift to knock someone off their edge. This mode requires a lot of players. This model has large maps, so matches with less than 3 players are more about getting to your foes than shooting them. These events feel a little too frequent. Although it may sound odd, this doesn’t allow you to take a deep breath. These events can be ignored, but they make you feel like missing out.

Every day brings new challenges. These challenges include winning specific events or pulling off tricks using certain cars. You can get cash bonuses for these, so there are many ways to make dough. You can unlock money for cars, cosmetics, and improvements by performing tricks, stunts, or completing challenges. Whether you play with others or do it all by yourself, you’ll get rewarded. It’s a vicious circle, and it’s one of the many reasons Crash Drive 3 is so addictive.