Amid Nintendo’s flurry of fall news during the Nintendo Direct announcement Now Came the debut of a long-awaited and much-rumored new character named Linkle. Even non-Nintendo lovers need to be able to figure out that the dual-crossbow-wielding fighter”from a little village full of Cuccos” is a feminine model of The Legend of Zelda’s connection. Linkle will be an exclusive personality for the upcoming 3DS spinoff Hyrule Warriors Legends due out in North America on March 25th, 2016. 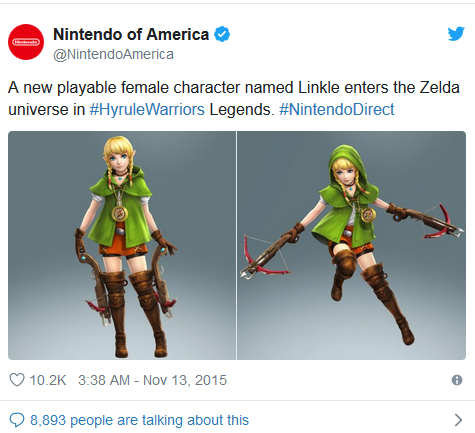 While not officially part of the Japanese game manufacturer’s canon — Hyrule Warriors Legends is developed by Dynasty Warriors creator Koei Temco — Linkle marks a bold departure from convention for Nintendo. The character was first introduced within an artwork book for the Wii U Edition of Hyrule Warriorsback In the summer of 2014 as a”girl version of hero Link” on a page dedicated to previously unseen yet ultimately rejected characters. So Like never made the cut for the that version of the game, but it seems that Nintendo has taken the design and followed for the handheld spinoff. The information arrives after weeks of significant speculation from the Nintendo community after a crossbow was spotted in a leaked Hyrule Warriors Legends trailer back in June.