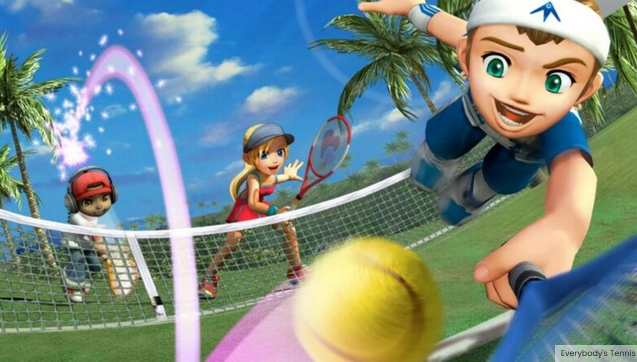 When it comes down to emulating real sports in video games, nothing is going to come closer than VR, so we have to throw a mention to First Person Tennis – The Real Tennis Simulator, a VR title on Steam that aims to emulate the feeling of winning Wimbledon. Of course, you won’t actually be at Wimbledon, you’ll just be gasping for breath in your living room, wearing a VR headset that stinks of your sweat, but the victory will still taste sweet.

Video games allow for a unique kind of wish fulfilment, usually coming in the form of playing as an all-conquering hero out to save the world/galaxy/universe (delete as appropriate). They’re gateways into imaginative new realms, but that wish fulfilment can also be grounded in reality, as there’s a wide variety of sports games out there designed to let you believe you’re actually good at sports. One of the most popular genres, and one that has a lot of history within gaming, is tennis.

Some of the first video games ever conceived used tennis as the foundation, and that legacy has continued with plenty of enjoyable and entertaining tennis games being released to this day. Naturally, we’ve decided to rank the best tennis games ever, so you can know which games deserve their place on centre court.

A product of the 2000s, the Outlaw series was an attempt to make sports games more edgy. Screwing the rules and the established traditions, the Outlaws games took venerable institutions like golf and volleyball and decided to add strippers, felons, bad Swedish stereotypes and other one note characters that might get a chuckle the first time you see them. The tenth time and beyond might start to become grating, however.

Tennis naturally wasn’t immune to this, with the Outlaw cast of characters taking to court, bringing their ridiculous antics with them. As a tennis game, Outlaw Tennis is about as basic as it gets, which is why it just scrapes by on this list, but the Outlaw series did bring with it the gimmick of starting a literal fight whenever you want. During a match, you could brawl with your opponent, with the winner receiving a buff during the next point.

It’s not the highest watermark of the tennis genre, but it was decent fun regardless.

For those worried that they’ll have to run up and down the room while wearing a headset, First Person Tennis includes three different methods of movement in VR in order to accommodate for limited playing space. There’s even online matches and spectator modes, along with regular tournaments for players who feel like testing their mettle against more than just the game’s AI.