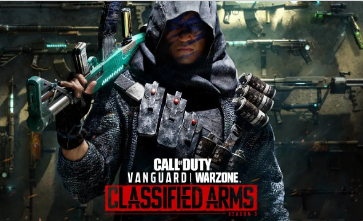 New Warzone Season Three Reloaded update shakes up the meta. It offers new ways to move around Caldera and new perks, bundles, and operator skins. Underground transit is the most significant change in the update. It offers players a new way of moving around the map. Let’s take a look at the main changes made in the update.

Champions of Caldera is a new mode for Warzone. This mode will have 150 maximum players and one, continuous closing circle in a Battle Royale-style struggle for survival.

All Operators will be able to drop in with their Custom Loadouts, a Gas Mask and one Redeploy Extraction token. The item pool has been slightly modified to highlight rare Weapons and equipment that is not usually found in Loadouts. You can collect cash to upgrade your Buy Station. This station offers the Advanced UAV, Specialist Bonus and more for a large fee. This game mode allows players to instantly refill their Health, Equipment and Ammunition. It encourages champions to be aggressive and eliminate all competition to maximize their chances of winning.

A fast travel system has been added to the Tac Map with 14 points. These points are indicated on the minimap by a “vault door” symbol. The lighting system will give intel to help players navigate and make decisions that are extremely useful. Over its history, Warzone has used many Fast Travel systems. These range from Subways to Red Doors. Raven Software has created the Underground Transit System on Caldera. It is using all its previous experience to create what it considers the best way to move around Caldera quickly.

The death tax has been lowered from 80:20 percent to 50:50 percent. The death tax was too harsh and made it difficult for players to keep track of how much cash they had when they returned from Gulag. Raven Software will test this 50/50 split and closely monitor its impact on the global cash economy.