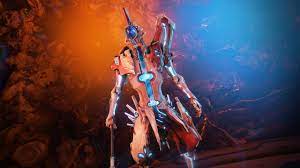 Caliban is the newest Warframe to grace its game’s namesake, The New War. It is a “Sentient hybrid class,” and if you take that to mean anything, you are probably deep enough into the game to farm its parts or close to them. Caliban also has some interesting abilities that go along with its unique classification. This means that unlocking the murder engine will be a top priority. It’s also the core of all-new gameplay content following The New War campaign. Let’s see where Caliban blueprints can be found in Warframe.

The process is simple but not difficult, however. Caliban is the newest Warframe to be locked behind open-world bounties. However, I’m not referring to any bounties. This one is tied specifically to “Narmer Bounties.” I won’t go into detail about what “Narmer,” for fear of spoilers. It’s unnecessary, for better or worse. After you complete The New War, the Narmer Bounties will be available. This quest can be found in your Codex on Orbiter. These bounties are nearly identical to those you already love, with a slightly higher enemy encounter level (50-70). Unless you are tired of running the same bounties every day, get ready to grind.

Here’s how it is described on the website of the game:

“Caliban Component blueprints can be obtained from Narmer Bounties during daylight on the Plains of Eidolon and Orb Vallis during Night. (Night in Cetus indicates that the Bounty will also be available in Orb Vallis). After completing The New War quest, Narmer Bounties are available.

Each cycle can only have one Narmer bounty. Also, each one of these can only give you one type of Caliban blueprint. If Caliban Systems are available, you will need to wait until the day/night cycle to swap them to see if Caliban Neuroptics or Caliban Chassis drop. It’s a bit disappointing. You will have to keep trying and hoping you are lucky. This is the nature of the game. The main blueprint is well-designed, and there’s no randomness. This Warframe design is also available for purchase on the in-game marketplace for 50,000 credits.

This isn’t all bad news. Other than Caliban blueprints, Narmer Bounties also drop other delicious treats. You can now acquire valuable set mods for your trouble. Narmer Isoplast is a common drop from Narmer Bounties that may be even more valuable than this. These will be the primary method of grinding Quills or Vox Solaris standing. They are worth 2,000 standing. This is twice the amount of a single Toroid in Fortuna, taking much less effort. I was able to get 15 Narmer Isoplasts from my first two bounties, which is more than enough to maximize my daily standing with any faction.

That’s right! They are good for both factions. You don’t have to farm Sentient Cores for the Quills or Toroids for Vox Solaris if you wish. This requires that you beat The New War first. It is a good chunk of the way to Warframe. You will get different mileage depending on the Narmer Isoplast drop rate.