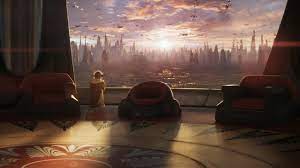 We were able to see yet another Star Wars game among the many exciting reveals at The Game Awards 2021 on December 9th. You can’t have too many good things.

Star Wars Eclipse will be an all-new narrative, action-adventure gaming experience that brings the High Republic era alive for the first time. It is based on a series of comic books and graphic novels. The latest Star Wars game title, Eclipse, is being produced jointly by Lucasfilm Games, Quantum Dream and the award-winning developer of Heavy Rain and Beyond 2 Souls. Star Wars Eclipse is currently in early development and has not yet been released.

Although we don’t have much information, Quantum Dream has provided some details about Star Wars Eclipse. We know that we will be able to choose from many playable characters. Each character brings their personality to the branching story. Each character and every decision you make together with them will have its storyline.

Although some characters and the story arc may be unfamiliar, it should be easy to feel at home in the territories. The Eclipse will be primarily in the Outer Rim. This is when several events could “alter the delicately balanced peace” of Lesser Space. The Drengir Crisis or raids by Nihil could be part of the Eclipse plot, which are critical storylines from the High Republic. Or, Star Wars Eclipse could have a completely new plot.

During The Game Awards 2021, a cinematic trailer for Star Wars Eclipse was revealed. It was shown on December 9th. This three-minute masterpiece is cinematic. The trailer was sent to a friend who, after watching it for the first time, said, “That could be movie.” This thought also ran through my mind as I watched the trailer. I wondered most of the time if this was live-action. We’re sure to be treated if the trailer gives any indication of what the final game will offer.

This is all we know for the Star Wars Eclipse, but we will keep you updated as more information becomes available. You can also check out other huge exclusives from The Games Awards 2021, like the new trailer for Sonic Frontiers and the announcement of Warhammer Space Marine II.